Next week is the draw for the TGO 2014. So, it got me thinking about the gear I use for this
and other backpacking trips.

Here is my  - TGO 2013 MY planned Gear - which seems to be very popular for some
reason:

I don't do gear reviews as such, but I wanted to write a few words on my favourite stove.

Let me preface my piece here by saying that I have a very simple approach to backpacking gear: it has to work and be idiot proof.

On my favourite stoves, let me start by dismissing gas. I had a gas stove fail on me.

Let me also say that I've tried quite a few meths stoves and one - Bushbuddy - wood burning stove.

So, my favourite Stove is small, easy to assemble and works ever time:

The Evernew DX Stove and Stand

I've had this for years and it has never let me down. Forget the micro measuring of meths for these things. I carry enough for the days I'm out and if I'm out for many days I arrange to post on meths to be collected. I use little 100ml plastic bottles.

Expensive, yes, but it will last and last and work every time - even when temperatures reach well below zero degrees C. (You warm the meths in your sleeping bag).

There are some who want water to boil in nano-seconds. Then there are people, like me, who are prepared to just relax and wait. So, no boil times. I do measure meths in - you soon get to know how much to use to boil your chosen quantity of water.

The stove and stand and kitchen roll and matches and lighter and the little cross section all fit easily in to my Tibetan 900 mug. When assembled for heating it can get top heavy.

I use three titanium pins wedged around it to stabilise it - it works. I also use some radiator insulation as a wind sheild (and other pieces as insulation under my sleeping bag/bivy bag).

Here are a few pictures: 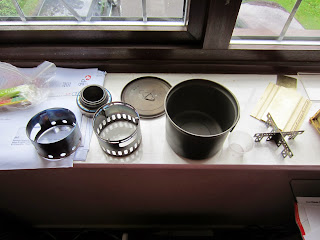 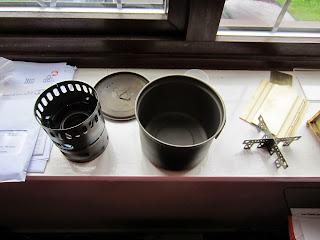 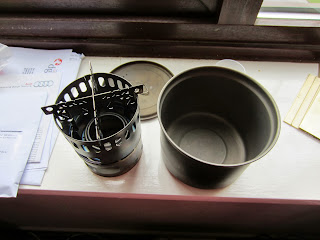 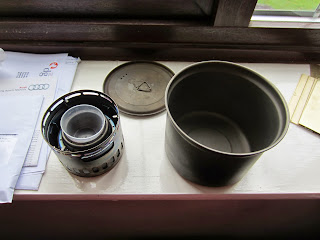 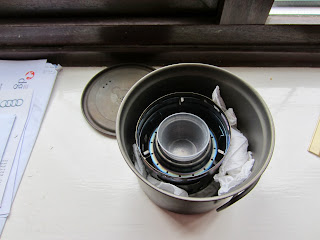 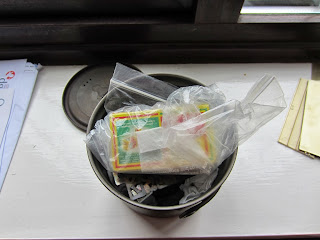 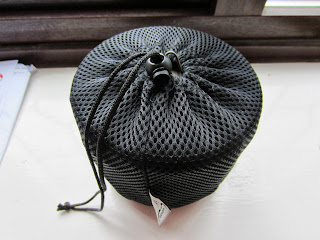 Sorry, it's not your fancy field use shots - I can't be bothered at the time. And it's not some glossy gear review. It's just a few thoughts on My Favourite Stove.

Could this be the alternative to meths?

There was a flurry of activity on Twitter about this after TerryBND posted this:

I'll be trying this soon.

OK I tried it. It will not work in a Trangia or Evernew DX stove or similar. It needs air.

(Update 27/10 This was my initial observation based on the DX burner not working. Terry has now done some proper tests with the Fuel4 Gel and found that the Trangia burner does work with the Gel - just not such a good a flame as with meths. My observations were based on me wanting to use what I normally use i.e. the DX stove and Stand. Terry's tests show that the Fuel4 Gel will work with a variety of stove set ups:

There's no doubt that with the right stove/stand set up Fuel4 Gel is a winner. ) 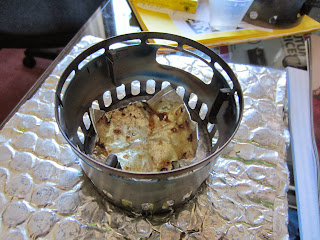 It's the top of the DX stand and a bit of foil shaped to hold just over 30 mls of Fuel4 Gel. Weight is next to nothing.

And, the great thing is you can improvise with anything to hold the pot above the gel.

And, as long as the gel is in some sort of container it will work. It will burn too quickly if it is just put as a blob on a flat surface.

It does need lots of air, I tried various ways with the DX top and bottom. The best way was using the top of the DX stand with the trivit. Putting the pot onto the top or bottom without the gap that the trivit gives just didn't work. It still needs a wind shield.

I think Fuel4 are on to a winner for backpackers wanting a good alternative to meths.

This gel in the right stove set up will do the job just as well as meths.

It's easy to use and in a dedicated burner it will be very efficient.

I understand Fuel 4 are working on this.

Ronnie Corbett - eat your heart out

I can't believe that I wore a pair of Scarpa SLs when I did Lands End to John O'Groats. (My

unembelished notes on this trip are tucked away in the beginnings of this Blog).

The Scarpa SLs were resoled and last saw me walking in the Himalaya's back in 2009.

Here are the comments that I made on this trip - three from the bottom. I went with Exodus and the Company is first class. I had previously been trekking in Peru with them:

In 2009 they used tents. Now they use Tea Houses which IMHO is not nearly so good.

The boots remained in Nepal.

comfortable. They are now my Winter boot of choice.

Now that Winter is approaching I decided to take my Scarpas for a walk.

Last week I had to cut short one of my visits to the Peak District. 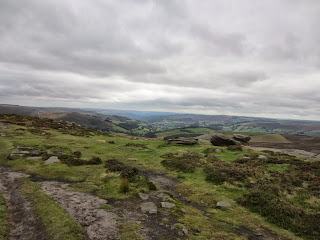 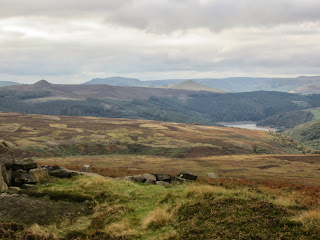 I walked from Hathersage to Edale, via Ladybower Inn and Win Hill. I pitched in the dark at Edale.
Just before I found this: 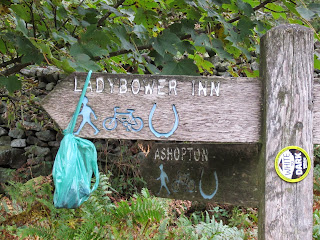 I jumped over a brook and managed to give myself a groin strain.
I had to catch the train back as it was not comfortable in the morning - and the plan was another 3/4 days around Bleaklow and Back Tor.
Why do people pick up dog poo = good and then hang it from a  sign ........ or tree?
Cannock Chase
So, a 40 minute drive gets me to Cannock. Tamworth does not have hills and Cannock offers some good walking. I get over there fairly often.
But, this was to be different. 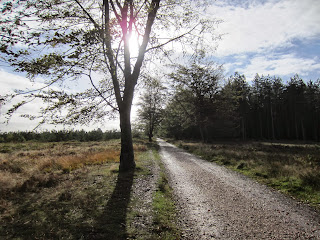 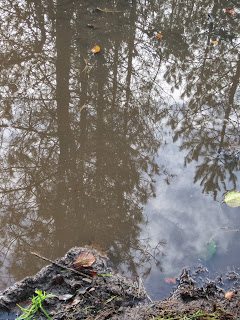 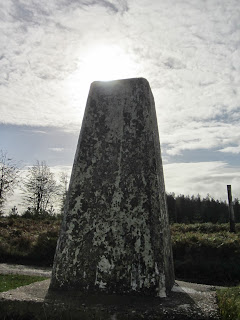 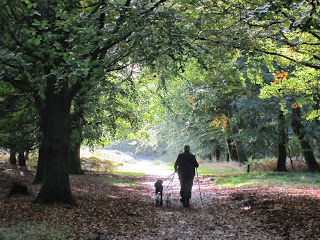 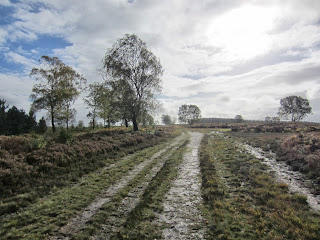 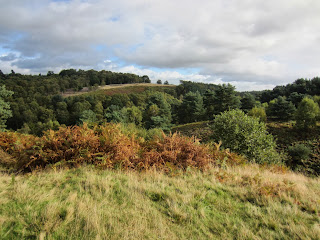 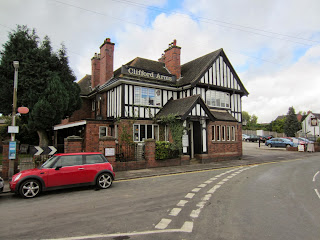 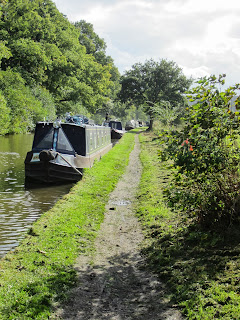 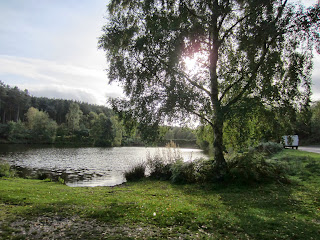 My walk over and around Cannock takes me around 6 hours. It includes a very good pub for a lunch break.
I don't have any specific routes. I just take off from the Visitors Centre and make sure I get to Great Haywood for lunch. Clockwise or anti-clockwise it's roughly the same time to reach the pub.
So, random walking on a good day. Not many people around.
Heading towards Milford I see a couple of cyclists. They go past me and stop.
"Do I know you? Were you in Nepal? Are you Gordon?"
Now, if you know me, you will know that my memory for names is not good. Who were they, I asked myself, while flustering and trying hard to think.
They were Paul and Mary, who live in Hurley - not far from Tamworth - but I last saw them in Nepal - in 2009. We chatted for ages and then said goodbyes.
Very spooky - they were in the Rohan shop when I was there last week (but they didn't say hello then).
What are the chances of meeting folk on Cannock Chase? Not many are there during the week.
What are the chances of meeting folk who you last met in Nepal - on Cannock Chase?
Anyway, my Scarpas were comfortable and now I'm looking forward to some decent snow. 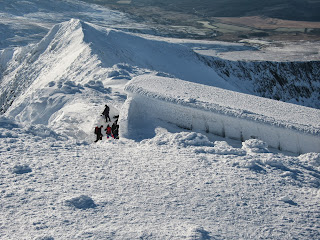 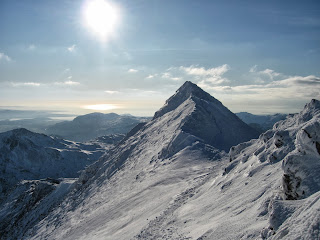