I needed to get some Munros done - so this is my IhopeIgetintotheTGOCin2013butIloveScotlandanywaytrip.

I had planned this trip for ages.

This trip was definately a car trip. Trouble was until last week, I had been over three months without a car! 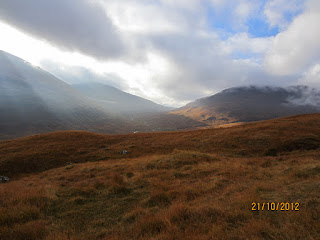 The plan was to spend three nights at Crianlarich SYHA and two nights at Oban SYHA.

I drove up to Crianlarich on Saturday 20 October.

The morning was very foggy and the drive to the start of Glen Lochay was through thick fog that just had to lift ..... 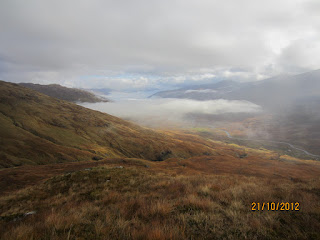 The drive up Glen Lochay to Kenknock is a long single track road, which I hadn't been up for a long time. The parking at Kenknock has been moved back down the road from where it used to be. But, it's a good place to start out from.

The walk along to Batavaime is on a track which makes it's was up the glen. It's a long way to Batavaime and I enjoyed the company of another hill walker, Bob, who was setting off to climb the same hills as me. Good conversation and good views - as the fog lifted - soon passed the time down to Batavaime.

The start up to Sron nan Eun takes a bit of working out, but, a faint path soon appeared to help confirm that we were heading in the right direction.

The fog hugged the glen as we climbed higher. The sun came out and played cat and mouse with the clouds for the rest of the day. 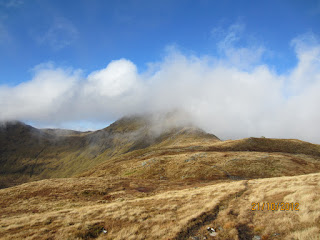 Bob soon disappeared into the distance. The climb up to Creag Mhor was in and out of the clouds, but there were breaks on the way up and the top was clear when I got there. 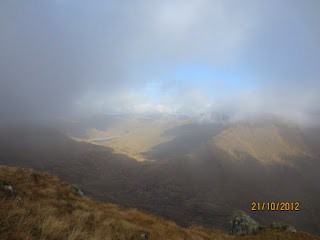 Eventually, the top came into view. 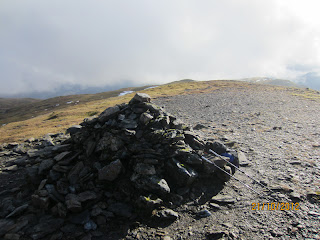 ﻿
The direct way to Beinn Heasgarnich is over crags, so a short walk towards Meall Tionail is necessary before dropping East to the flat col - where the SMC book says there is a Lochan. But all there was were areas of exposed peat moor.

The way up was fairly clear. Not far from the col I met and had a good chat with a group of five students from Stirling University. What a great idea - study and mountains.

Now, why didn't I go to University in Scotland? I applied to English Universities at the time I was living in Aberdeen! 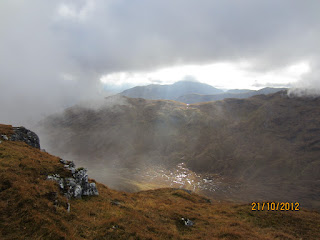 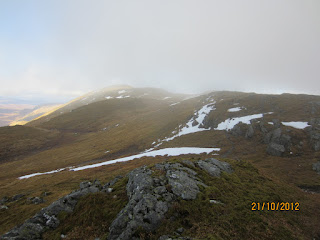 The walk over to Beinn Heasgarnich is fairly easy, over undulating ground.

The clouds were beginning to leave their hugging of the hills and the evening was to give a stunning sunset.

Getting down from the summit is over easy grassy slopes and although the book says one or two ways off, all that was required was a rough compass bearing which eventually led down to the upper track along the glen. 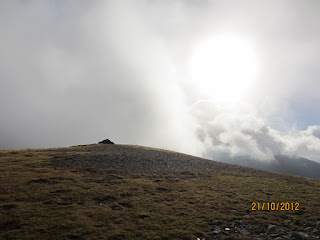 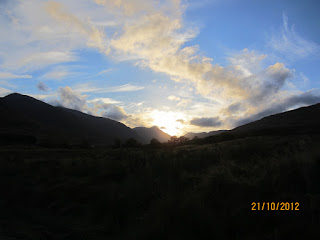 I had wanted to climb Ben Lui for a long time. I was waiting for a good day and previous trips to this area were not accompanied by good weather. So, when I read the MWIS forecast for this Monday, I thought I was in for a real treat. But the day started off foggy. 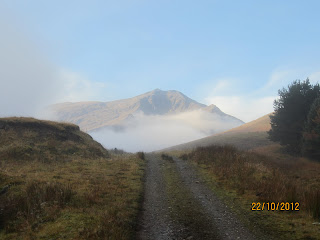 I enjoyed the curtain raising walk along Cononish and thought the fog would repeat what happened on Sunday. But, it didn't quite work out that way. 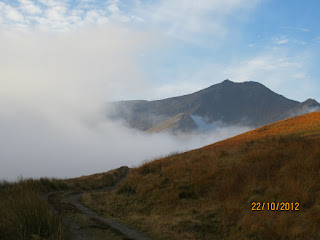 The track ends at the Allt an Rund. From here a fairly distinct path heads straight up towards Coire Gaothaich. Now, I've read that this Coire gives a classic winter climb. It gave me an interesting experience.

If I had seen where I was going and if I had stuck to the path - which I lost - I would have proceeded up the North East ridge. I would have ended up at a cairn a few metres from summit, with a level traverse over to the summit. 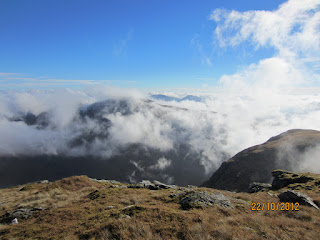 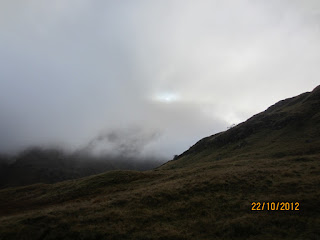 So,I  had lost the path, but, I was heading up.
(( There is one experience I will never forget as I drive through Glen Coe.
On 1 March 2007 I climbed Buachaille Etive Mor by Coire na Tulaich. The last 300 metres were on hard snow and I knew that one slip would be curtains. The rewards were a fantastic days in fresh deep snow. The penalties could have been ............... What brought home to me the position I was in was that a few weeks later 3 walkers were killed in the Coire. It still makes me feel cold thinking about it.))
I was heading up a stone chute that was getting steeper and steeper as it neared the end of the chute. I knew I was not in the right place, but, I got to the point where turning back was not really an option. The end appeared. Overhanging rock. Maybe there was a way over and up these rocks. A quick look had me scrambling back a few metres. OK, now what?
To the right was a grassy-ish lump with a few loose stones and just past this was a crack going to the left. The crack looked do-able. Ok, here goes ........ I had my knee on a slight purchase and my hands were making some connection with grassy bits. What was needed was a push up with my right leg. ............................... My right foot slipped! All my weight was on my knee. My hands were useless for holding a fall. Again, I pushed with my right leg, and, this time I got over to the crack. A few metres later I saw a path and two shadowy figures emerging through the mist. Made it!
So, now when I drive up past Ben Lui and Buachaille Etive Mor I will feel a shudder and my hands will sweat. (They are sweating as I write this!)
The summit was a short distance higher and a bit of easy rock scrambling had me on it. The wind was cold. Along the ridge I saw some people on the other top - they must have found the path. 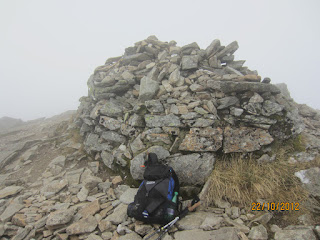 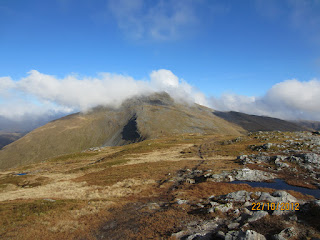 The ridge from Ben Lui goes just East of South. There was a faint path in places, which I didn't see much of. I headed South. I then spent a wee bit of time going one way and a wee bit of time going another way. Then out of the mist emerged two figures. They had left Lui for Glen Lochy where their car was. I showed them where they were and said it was fairly straightforward getting back to Lui and down the right way. (So why was I getting lost?!!) 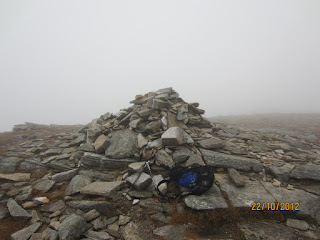 The broad expanse of grass and mire at the col eventually came in sight and I could see a faint path that eventually led up through the mist to Ben Oss. It had just gone 1700. There was a good way to go. I had been up Beinn Dubhhraig years ago - which is just as well, as I knew that time was getting on. I also knew the path from Dalrigh to the tiny lochans near Beinn Dubhchraig. It has to be one of the boggy-ist ways up a mountain.
I was in the mist. 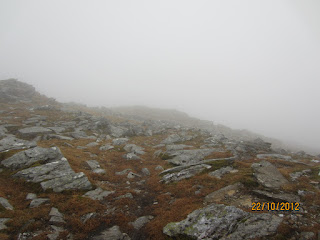 Luckily, the way between Oss and the lochans was a fairly clear path. And the way down parallel to the Allt Coire Dubhchraig was reasonably clear. Except ............ it was getting dark and the mist threw back the light of my headtorch. I proceeded down the path with my headtorch off until well past 1900 when the mist cleared lower down. On with the headtorch.
The slip sliding and bum plants and foot plants and swearing and black oozing mire were endured as I neared Dalrigh in the distance. Lights were twinkling in the distance and my headtourch guided me into the mire and towards them.
I got back to Dalrigh car park at 2030.
Now, I had decided not to go to Beinn Dubhchraig because of the time it would take. I left my route plan at the hostel with a finish time of 1930. I was concerned that the MRT may be alerted. I got a signal at Dalrigh and rang the hostel. The line was engaged. It was Barbara ringing the hostel at the same time. I rang Barbara, then rang the hostel and relaxed.
I slept well that night.
Monday 22 October - Ben Cruachan and Stob Diamh
The drive down to Cruachan Power Station was promising. Would the cloud lift? No. Lower down it was clear, but higher up - along the ridge it was not. 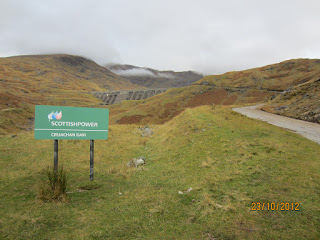 Over the dam and on to the broad South ridge of Meall Cuanail. Then up into the mist.
The sun did try to get through over the top of Meall Cuanail as I looked back from the col. 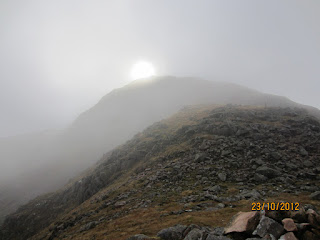 Ahead was a steep-ish climb up and up into the mist - until the top appeared. 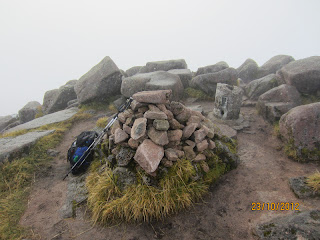 The ridge walking over to Drochaid Ghlas was good, but, the views were zero. A few little scrambly bits, but pretty straightforward. Then I set off - North. About 200 metres on I turned round and came back to find the path East to Stob Diamh. Mist! 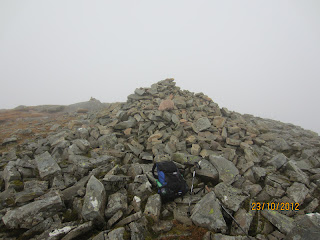 The way down started very misty, but, lower down it cleared. The way down to the dam was fairly easy. 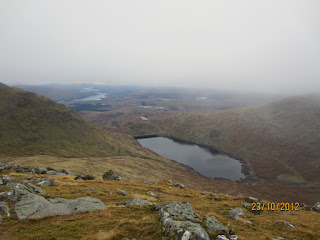 From the dam there is a path down to the station underpass and the roadside car park. I was in my car at 1830. It was dark.
Another great day.
And Oban SYHA is a palace. A good curry and a good night's sleep in my own en-suite room.
Wednesday 24 October - Beinn Sgulaird
This was more like it. Clear blue skies and views every where.
The parking place at Druimavuic is just the side of the road. The start of the walk is up a track. If you read the SMC book the route appears to go up some way before turning north to the point 488m. So, I went past the end of the broad ridge and up the track.
I had missed the turning. A look at the map and I decided to go on the track all the way to the col south of point 863m. From here it was an easy grassy rise to gain the main ridge and route on to Beinn Sgulaird. 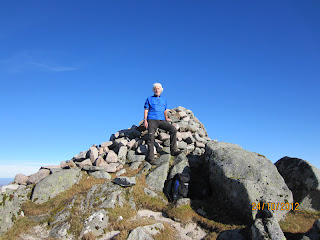 There was only one other person on this hill. The views were to die for, especially after the last couple of days. 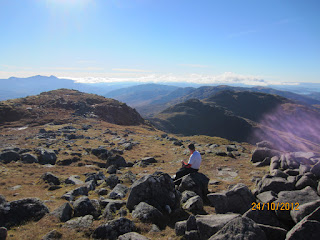 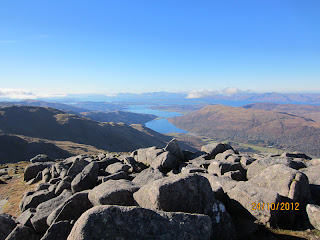 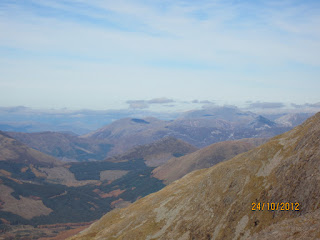 The route down the main ridge was a number of big ups and downs, but heading west with Skye and Lismore and fantastic views all round made this a great day to end my spell in Nirvana. 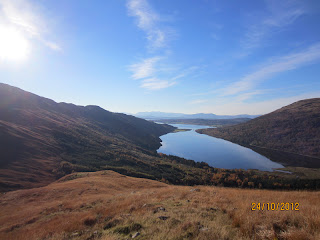 Back in Oban I had a shower and headed for EE - Usk - a fantastic fish restuarant. It's right on the quayside. I pushed the boat out (if you'll pardon the pun) A dozen oysters, a superb French wine followed by salmon and prawn mornay and cheesecake with a large Talisker and coffee. After all, the 25th was my birthday and I was celebrating my trip and my birthday that night.
And, hopefully, I'll be lucky in the TGOC draw - fingers crossed.
Posted by Gordon Green at 12:18 7 comments: